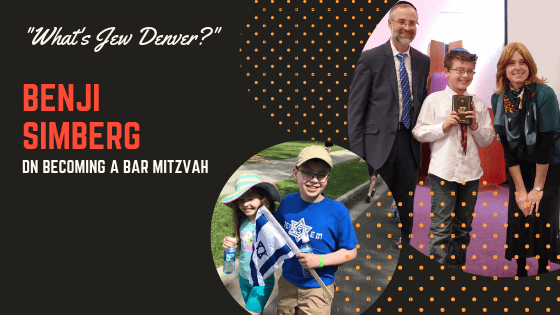 This year is going to be a lot of “firsts” for Benjamin Simberg (a.k.a. Benji). First time putting on tefillin, first time participating in the prayer services at synagogue, and hopefully the first time understanding Hebrew as a third language. Not only that, he is going to be the first boy in his immediate family to have a Bar Mitzvah. No pressure on this little guy. And since we are so excited for this all to happen to Benji, we decided that he should be the first interview for our new blog called “What’s Jew Denver?” We’re just adding another worthy first to that growing list.

Benji started with The Sunday Experience six years ago in Kindergarten. As we know, time flies, and here he is on the brink of becoming a Jewish adult. Benji’s Bar Mitzvah is planned for next October, and it looks like his whole family will be joining him in Israel to celebrate this once in a lifetime event. He informed me that one of his goals this year is to speak and understand Hebrew before he goes. I told him to stop by TheJE any time, and we will work on that with him.

As we chilled out on the big couch in the hall, at BMH-BJ, I asked Benji to give me a little background information on himself. Turns out Benji is a first generation American, born in San Diego, CA. His parents are both from Russia. I asked him if he could tell me about some of the differences between growing up in the U.S. vs. what he knows about growing up in Russia.

He told me that back when his father was a boy, in the Solviet Union, he did not have a bar mitzvah because there were many restrictions on the Jews. Despite the restrictions and rules against practicing Judaism, his parents persevered, left, and were married in Israel. Benji told me that he feels very lucky to be an American Jew, because there are still some countries that restrict the practice of Judaism, but in America we are free to believe and practice what we want.

I could tell that Benji was ready to take on this whole ‘Jewish adult’ thing with a lot of pride, hope and determination. Therefore, I decided to ask him some tough adult questions – to get him ready for the real world after 13.

Me: “When you become a Bar Mitzvah, you are no longer a Jewish boy, but starting your journey as a Jewish man, with all of the rights and obligations of a Jewish Adult. Knowing this, do you think you are ready and how does that make you feel?

Benji: “I feel proud. I have been waiting for this moment for a long time. I am also a little anxious and nervous about it too. I look at it as the beginning of a new chapter. I am looking forward to putting on my teffilin and praying with my Dad.”

I then asked him the question that every boring adult wants to know, “What do you want to be when you grow up?”

His reply was an engineer. Not just any engineer – a robotics engineer. I told him that I went to an engineering school, and he briefly thought that was cool, but was probably wondering why I was now interviewing 12 year olds instead of creating exciting new inventions. Well, I’m going to leave the magic up to someone else, because if we are looking for the next generation of scientist and engineers, that are going to save civilization, it is very possible that Benji might someday be one of them.

Benji sees his future as an opportunity to do tikkun olam (repair the world), and wants to make an invention someday that will help man-kind. I am going to be anxiously awaiting this invention from Benji, but for now, it turns out that he is a typical pre-teen who likes to read, play ping pong, and do math for fun. He has a nice sense of humor and is a very sweet, well-mannered boy. His parents must be very proud – we are too at The Jewish Experience. We are looking forward to seeing Benji take the next step in his Jewish journey and check off that list of firsts, one by one.

The Kickoff: Sleepless Before the Denver JWRP Trip