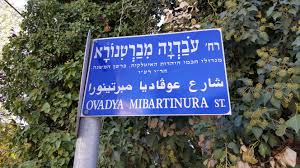 This is not the story of the wine. Though this is from whom that delicious wine gets its name! On this Shabbat in 1488,  Rabbeinu Ovadiah Bartenura arrived in Eretz Yisrael after a three-year journey! Can you imagine traveling from Italy to Israel for three years? He was only in his thirties and had already written an extensive eponymously-named commentary on the Mishnah, and Rabbeinu was only getting started.

As he left his wealth and leadership posts in Italy, at each city on his journey the locals begged him to stay as their leader. His writing of these communities (e.g. Rome, Naples, Sicily, Alexandria, Cairo, Gaza, Hebron, and Bethlehem) are invaluable since most of these Jewish communities are no longer extant. However, he was determined to make it to Jerusalem. When he arrived in Jerusalem he records:

“About three-quarters of a mile away from Jerusalem… the blessed city was revealed to us, the site of our joy. And at that point, we tore our clothing in sorrow, as we were required to do. And when, sometime later, we saw our holy Temple and its ruins, we tore our clothing a second time for the Temple. We came to the gates of Jerusalem, and we entered on the thirteenth of Nissan 5248, in the afternoon. On that very day we stood at the gates of Jerusalem.” and he continued “A small section of the Western Wall still exists. Its stones are huge and thick, I have never seen such great stones in any ancient building, neither in Rome nor in any other land.” 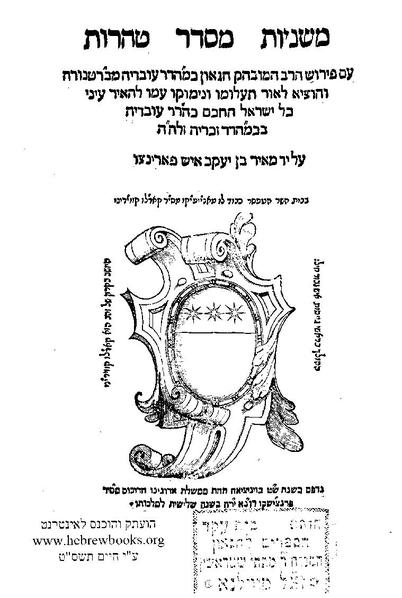 The city was desolate, and the Jewish community reduced because at the time the Muslim leadership persecuted the Jewish community with additional dhimmi taxes and in other ways. However, Bartenura came to rejuvenate the city and was soon giving Torah lectures in Arabic, Italian, and Hebrew. He was even willing to dig graves when others could not. Soon he even gained the respect of the government. It seems he was even asked by the Muslims to help decide different legal cases, and of course, he also worked successfully to reduce the special taxes on Jews.

As the Jewish community grew  Rabbeinu Ovadiah grew into his role, and this only increased as the influx of Jews came from the Inquisition. To this day he is considering a great leader, and his commentary is fundamental to understanding our sages.

Parsha in a few words: Find your little Aleph